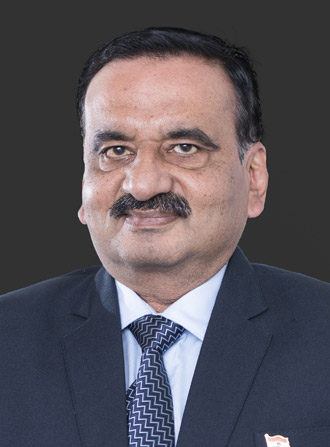 Mr. Dinesh Kumar Saraogi has been associated with JSP since its inception. He is currently serving as Group Chief Executive Officer – Steel. He is responsible for JSP’s operating units of Angul, Raigarh, Patratu, Barbil, Raipur Machinery Division and the Steel Structural Division Punjipatra,. He is also the Occupier and Whole time Director & Mines Owner of the company.

With an experience of more than 41 years in diverse fields & vast knowledge, he has been an inspiration for every individual in the organisation. Mr. Saraogi is well-known for his steadfast & diligent demeanours and has handled various challenging projects across the JSP group.

Mr. Saraogi started his career with the Jindal Group in 1988 with Jindal Strips Ltd., commissioning the pilot plant facilities to produce Sponge Iron / Pig Iron and Ferro-alloys. By virtue of his exceptional leadership ability, Mr. Saraogi progressed consistently from the level of Manager (Works) to higher positions and is currently leading as Group CEO, - Steel since April’22.

From 1988 to 2007, Mr Saraogi discharged his responsibilities with distinction & played a key role in operations of Raigarh plant of JSP.

In 2007, he was entrusted with the leadership of setting up the 6 MTPA Steel & Power Project at Angul, Odisha, starting from essential land acquisition to establishing the complete integrated steel making complex. In 2010, he served as Executive President and Head of Jindal Shadeed Iron & Steel LLC in Oman.

In 2012, he again spearheaded the Angul steel plant project and installed the largest SMS Electric Arc Furnace plant & the widest Plate Mill in the world. Today, the Angul steel plant is home to the world’s first CGP-DRI plant. In 2018, Mr. Saraogi as COO Chattisgarh, was entrusted with full capacity utilization of JSP’s Raigarh steel plantIn April 2022, he assumed the role of Group CEO – Steel Division of JSP.

He holds a degree in Mechanical Engineering, Batch of 1981, from Govt Engineering. College, Jabalpur. His wife, Mrs. Sujata Saraogi, a graduate from BHU, Varanasi, is a devoted mother & a homemaker. She is also the President of Jindal Mahila Samiti, Raigarh, which has a significant presence in CSR activities in and around Raigarh. They are blessed with two able sons, Mr. Shashank Saraogi and Mr. Somansh Saraogi, who are married and settled in the USA.