Jindal Steel & Power Limited (JSPL) is an industrial powerhouse and one of the leading companies in the Indian steel industry with a significant global presence. It operates the largest coal-based sponge iron plant in the world and has a substantial presence in domestic power, mining and infrastructure sectors.

JSPL produces economical and efficient steel and power through backward and forward integration. The company’s product portfolio spans across the steel value chain from widest flat products to a whole range of long products and rails. JSPL exports its diversified product portfolio to 22+ countries.

JSPL’s Raigarh plant is the world’s largest coal-based sponge iron manufacturing facility in the world, with up to 3.6 million tonnes per annum (MTPA) steel production capacity. It has an installed 299 MW captive power plant (CPP) at Raigarh and a 540 MW CPP at Dongamauha, district Raigarh, Chhattisgarh.

JSPL owns and operates combined power generation capacities of 5049 MW including the 3400 MW O.P. Jindal Super Thermal Power complex at Tamnar, Chhattisgarh. Since its inception, a 6.9 km long cross-country conveyor belt (the second-longest in Asia), was installed to feed coal to the plant.

Jindal Industrial Park is India’s first Industrial Estate in private sector developed in Raigarh District, Chhattisgarh. It is spread across 800 acres and has been designed with a vision to develop the backward areas of Raigarh and create more job opportunities for the underprivileged. 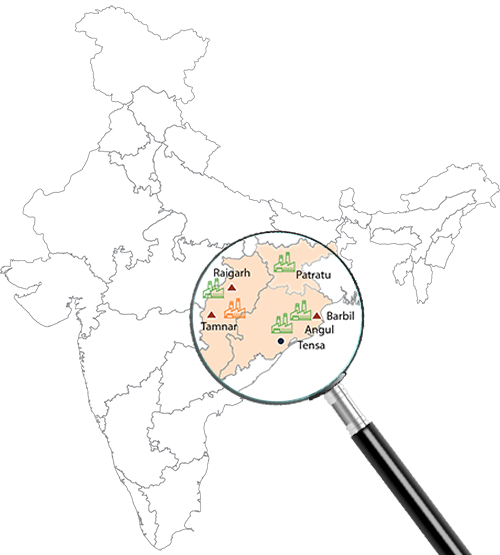